Once the B.A.C. came into existence, the Cedar City Community put all of their support into improving the school. Because the B.A.C. was created as an agricultural college, it needed to have 80 acres of farm land in order to support an agricultural curriculum. The school’s Commercial Club appointed a committee to secure twenty and a half acres of irrigated land for $8,675. The committee also procured twenty acres of dry land for experiment. The other forty acres was taken care of by donations from  Henry W. Lunt and T.J. Jones, a gift of roughly $800.1 For such a donation to be given showed how much the Cedar City community supported the B.A.C., and it made sense for it to do so, because the school offered several benefits to the community. It brought in new customers for local business, prestige to the community, and even medicine.  For example, the B.A.C. gave free monthly clinics to farmers’ livestock. These clinics served to give students medical experience, but it also benefited the community by keeping their livestock healthy.2 It was relationships like these between the Cedar City community and the B.A.C. which resulted in the city’s strong support of the college. The Iron County Record discussed the importance of paying taxes to support the school, and declared “the person who, if at all able to do so, refuses to pay his portion of the tax, by so doing puts himself on record as an enemy of the school and of Cedar City as well.”3 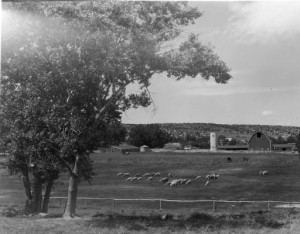 The school’s facilities would also be improved in its first years. Several school buildings were improved: The library was painted, enlarged, refurnished, and had electric lights installed; the science building had new hardwood floors installed, and improvements to its classrooms; the Gymnasium was “almost entirely new” and had shower-baths and dressing rooms for girls created.4 Principal Roy Homer and the Board of Trustees were responsible for the acquisition of land and the improvements to the school, and both the community and the school recognized it. “Principal Homer… is entitled to much credit for the interest and enterprise he is showing in connection with the development of the school,” said the Iron County Record. “The professor has been laboring incessantly to obtain funds for the cultivation of the farms acquired at the time the school was transferred to the B.A.C.”5 Beth Hamblin, writing for The Student, also gave Principal Homer recognition for the school’s improvement, pointing out his work during the season and off-season of school to improve the campus. Hamblin also voiced an attachment between the students and Homer, stating:  “Our Principal assumes a greater responsibility for every student than most principals do. He is concerned in every little act we do, and he does not hesitate to correct our ill intentions when he is aware of them… He acts as a father over us all and is just as considerate and kind as much interested in us as most true fathers are.”6

Principal Homer’s effort allowed the B.A.C. to flourish in its early years, and he became something of a hero in the community and the school. Homer accomplished these improvements by securing funds from the Board of Trustees, which entrusted the school with funds because of the growing enrollment in students.  The B.A.C.’s first semester set a new record for student attendance,  and enrollment of students continued to grow. The graduating class of 1916 was the largest on record with 48 graduating students out of a class of over 200.7  Because of the increase in enrollment, it was safe for the Board of Trustees to appropriate more funds to the school, since the school would make more money from fees and tuition as more students attended. 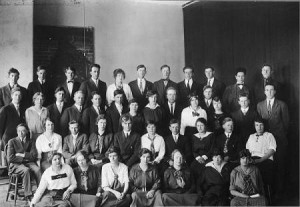 The success of the B.A.C. in its first three years allowed for the new institution to progress further. On July 10, 1916, the Board of Trustees gave the school Junior College status, which meant it could finally host college courses (high school curriculum was still being taught prior to this), but it would have to eventually stop teaching high school courses.8 The Board of Trustees continued to give the school overwhelming economic support; the school was appropriated $60,000 for improvements after becoming a junior college.9 The B.A.C. was enjoying an almost meteoric success, but the future growth would be stunted by America joining World War I and the Influenza Epidemic.