The post-war celebrations of Cedar City were marred by the Influenza Epidemic which plagued the town for well over a decade. The disease came into Cedar City in the fall of 1918, after a group of citizens returned from the State Fair and General Conference  carrying the disease with them. Within days, influenza was “sweeping like a fire through Cedar City and breaking out in the neighboring communities.” 1 The timing of the influenza could not have been worse; Cedar City had only one doctor, Menzies J. Macfarlane, to treat patients. Fortunately, Dr. Macfarlane was dedicated to his patients, often times forsaking rest to treat patients. Back then, few people had telephones, and so people would come to his home, sometimes in the middle of the night, in order to have him look at bed-stricken patients. “It was a fortunate thing that he could exist on very little sleep, or none at all,” Dr. Macfarlane’s son, L. W. Macfarlane, wrote. “Very often a night’s sleep was replaced by a bath, a shave, and a clean shirt. After such a brief interruption he could face the day, to all outward appearances none the worse for one or even several sleepless nights.”2

Measures to prevent the spread of the disease were soon taken up. On October 10, Utah’s State Board of Health issued an order to close all indoor gatherings. “Churches, Sunday Schools, Public schools, universities, Theatres (sic), business colleges, Ward meetings, picture shows, Fraternal meetings, pool halls, Dance halls, private dances, Public assemblages of all kinds.”3 As the town physician, Macfarlane enforced this order and closed all public facilities, including the Branch Agricultural College. (although the order was disregarded twice when WWI ended a month later and Cedar City celebrated). Other measures were enforced, such as the wearing of gauze masks in public. This measure was particularly annoying  to citizens who were addicted to chewing tobacco as they had to restrain themselves from their chewing in public. Furthermore, the city was placed under quarantine and had officers stationed at all entrances to monitor outgoing and incoming travelers.4  Normal life came to a standstill in Cedar City. 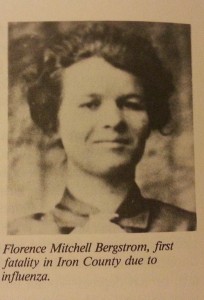 The first death occurred at four in the morning on October 23. Florence Mitchell Bergstrom, wife of Macfarlane’s pending partner, Dr. Jacob W. Bergston, came down with the flu in Parowan and died of complications due to pneumonia.5 This kind of death was the common way influenza patients died; they would contract the flu and develop pneumonia, which would kill them because they were weakened by the influenza. This is why young people, such as B.A.C. student Vera Adams, passed away from the infection.6

The announcement of Vera’s death Fig.2

Treatment was bed rest and isolation to prevent the spread of the disease, although a vaccine against the influenza was experimented with (the vaccine proved ineffective as Dr. Macfarlane came down with the flu after having taken it. Fortunately, he recovered quickly). The reason for bed rest being prescribed was because of a widespread theory that rest would give the patient enough strength to fight the disease. With this notion, Dr. Macfarlane, with permission, converted the unused B.A.C. facilities into a makeshift sick center, taking advantage of the comfort provided by the space of the buildings and their furnaces. Volunteer nurses, some of whom were recovered patients, tended to the needs of the sick. Ultimately, 200 cases of influenza were documented in Cedar City. From the onset of the epidemic to the end of November, sixteen cases of pneumonia were documented, five of which proved fatal to the victims. Cedar City weathered the storm, and in December  the Cedar City Board of Health lifted the quarentine, reopened public spaces, and closed down the influenza hospital. This proved to be premature however, as another outbreak occurred in March of 1919, and more lives were lost.  Outbreaks continued for the next decade, but fortunately, the last serious outbreak was in January of 1920. 7 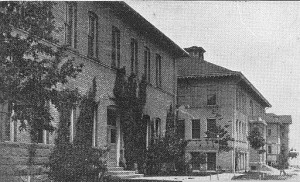 These buildings would be converted into a makeshift hospital during the epidemic Fig 3.

The Influenza Epidemic left a mark on Cedar City; many good people, some of them young, perished because of this disease. The life of Cedar City came to a standstill as the joys of community gatherings were banned, and the B.A.C. was closed. More people from Cedar City had died from the Influenza Epidemic than those who did so serving in WWI, and it haunted the town for over a decade. However, thanks to the dedication of Dr. Macfarlane, the damage was kept to a minimum, and his name should be treasured as a hero.